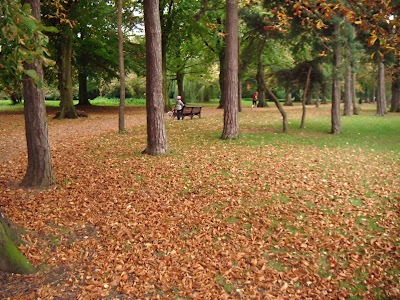 Nicola is five years old again. She is somewhere wide and grassy, lined with paths and ancient trees, and her Dad is there, walking beside her. He’s laughing. It’s so easy to make him laugh; all Nicola has to do is pull a face, or swing from his coat sleeve, or simply chatter. It’s a kind of magic. When he glances down at her, which he does frequently, his grin is wide and real and full of glinting teeth. Even stooped over like that, he seems impossibly tall, as high as the treetops, and impossibly happy. There are dense, glowing ashes piled inside him. She can see them smouldering gently through his eyes.

And it isn’t winter yet, but only autumn. “My favourite time of year,” he tells her. The trees are full of autumn. They’re brown and yellow and rust-coloured, a waxy lipstick-red. One of the tallest is even a glorious deep purple. Nicola has been watching that one for a while, watching it grow larger up ahead. She’s longing to reach it. She wants to touch those purple leaves; she’d like to sniff them. If Dad isn’t looking, she might even slide one across her tongue . . .

Biting back a secret smile, she turns her head this way and then that, taking in the clean, crisp sky and the dewy grass, the mushrooms that sprout among the tree roots in a spongy, spreading rash. There are conkers everywhere. They litter the path like fat Maltesers, but Nicola isn’t collecting them, not today. She feels one roll beneath the sole of her boot and her smile grows. The conker’s too hard to crunch down on, but nonetheless the roll itself is satisfying. She steps sideways to make it happen again, but Dad snatches up her hand, and the air stirs and thickens all around them.

It’s smoky, this autumn air, full of the promise of Halloween and Bonfire Night. It makes Nicola think of wet socks and coming home, of potatoes and foil blackening together amidst white, untouchable coals . . . But then Dad pulls her closer still and the smokiness gives way to the familiar scent of his creaking leather jacket. Briefly, she nuzzles her face into his side. He smells sweet and musty, like the inside of the car.

As soon as they reach the purple tree, he’ll swing her up into the branches. Nicola knows that it will happen without her even having to ask. “There you go, Princess,” he’ll say, his face big and pink and beaming, and as he lifts her, she’ll reach down with her small, stubby hands. She will run her fingers over his wiry head and watch the ripple of his thick brown curls. Then she’ll look past him to admire her own feet, kicking back and forth through empty space.

He won’t be able to reach high enough to ruffle her hair in return, but his grin will somehow spread even wider, splitting his beard, and: “On top of the world, kid,” he’ll say in one of his silly T.V. voices. Then it will be Nicola’s turn to laugh.

Time will pass up in that tree. The bubbles of sunshine between the leaves will slowly stretch and burst and turn a deeper shade of orange, but he won’t make her go home. She’ll cut him off before he can suggest it: “Please, Dad, not just yet . . .”

And he will nod, his big face flushed with the early sunset. He’ll go on holding her safe and steady among the swaying, purple branches until eventually Nicola will feel as if she’s floating. Fluttering. On top of the world. She’ll never have been as high before, never so knowingly happy.

(extracted from The Dawning)