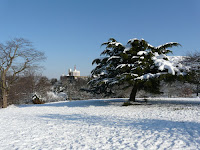 The snow had transformed everything. Zac’s hill had become a mountaintop, the whole park some storybook kingdom; even the other kids’ high-pitched shrieks were softened by its padded, magical layers. Zac sat in the sledge. He was perched on the brink of the highest peak, breathing in crystals and wishing he was gone.

He felt compelled to admit that, just as he felt unable to stop looking. In the distance, beyond the fairytale trees, the deserted playground had transformed into a futuristic city. It was all strange, glittering angles, sci-fi walkways and suspension bridges, elegant towers with head-spinning drops. Today, it would be padlocked. It didn’t belong to the children anymore, not to these present-day children anyway, although they were everywhere else, moving in fits and bursts and surging ripples. Scattering across the other hills and craters like blown confetti, their bright coats and flying scarves unreal against the white.

Almost everything was white. The sky all around Zac, and his chattering teeth, the air that snapped between them. His knuckles, he was sure, were blanched to the pale of their bones beneath his gloves. Zac wondered if, in all his life, he had ever felt this scared.

The rope tied to the front of the sledge was frayed and grubby, not much more than a handful of unravelling strings. Yet he leant forward to wind it tighter around his woollen fists and as he shifted, the snow directly beneath him creaked and dipped. Like the warped old wooden boards of some galleon, the precarious deck of a sinking ship. Any moment, he knew, it might give, it would collapse. He’d be sent flying, falling, spinning over the edge –

As if that wasn’t the whole point of being up there. What was wrong with him?

He couldn’t give up, couldn’t trudge down to where the little kids were playing, closer to the bottom. Far too vividly he could picture that return: Mum and Dad waiting with Jamie, while the sledge bumped along behind Zac as if he were a toddler dragging some dead-eyed toy about, a plush, stuffed dog on a lead maybe, a duck with wheels. He knew how, as soon as they saw him, they’d start to laugh.

Of course there was no possibility of retreating. And yet – no way he could sledge down.

He’d started to shake, he realised. To shiver. But that was just the cold, surely? The cold, which was everywhere. Pushing up through the snow and the sledge, through his jeans, his flimsy skin. A cold that seemed to rise directly from a secret darkness packed far beneath the blinding earth. A chill so abruptly cutting, stinging, that Zac was forced to blink back tears. He blinked and blinked, wishing with all his might that he was sitting at home, beside the fire, watching television perhaps, and eating toast. Definitely eating toast, he told himself. Although truly, he longed to be anywhere else, doing anything else. To be anyone but Zac.

Except that then, suddenly there, between those confetti kids and their sledge tracks, through his own ice-bright tears and all that white, there was Mum. She was heading towards him, red-faced, arms pumping, puffing out steam and grinning as she waded closer. She was wearing her new suede coat. Such a deep, burnt orange colour, that coat; she flared like a flame against the snow. Briefly, Zac recalled church, the Christingles lining the deep stone sills. And then, despite how obvious it was that he was stuck, trapped, that he wasn’t about to go anywhere, Mum shouted. Shouting loud enough so that even the people waiting, far away, might hear.

And almost before he realised what was happening, she was climbing on to the sledge behind him, wrapping her long, warm arms around his belly.

“You’ll be ok,” she whispered, and then she pushed.

And although Zac knows that the flight must have been exhilarating, that his heart was bound to have lifted as trees and kids and powder went tumbling past, his main memory of that sledge ride is of Mum. He remembers her arms around his middle, her cheek pressed against his own – and then, flickering out around them, against that glaring, spilt bleach sky, her joyous amber coat. The most vibrant, living colour, he’d thought then, in the entire Universe. Reaching out to grasp it with one flailing, grateful fist.

(glimpsed from The Dawning)