We had the most amazing night last week at Nottingham’s brilliant Five Leaves Bookshop. GIANT thanks to Five Leaves and the incredible Jane Spencer from Eyrie Press, and to all the fabulous friends, both old and new, who came to help celebrate my new novel – you’re all wonderful. We Wait has been well and truly launched!

My fourth novel, We Wait, is published today!!  Thank you, thank you, Eyrie Press, and to everyone else who has supported this book – I can’t honestly express how happy I am (and the cats seem happy too)

Thank you tons to BBC Radio Nottingham’s incredibly warm and welcoming John Holmes for inviting me to join his Sunday morning show to review the papers in the final run-up to We Wait’s publication (I’m so excited!!)

If you’d like to hear me babbling on about royal scandals, floods and horse hotels, you can listen again here.

This month also sees the release of The Furious Gazelle Presents: Halloween, an anthology gathering together the winners and some of the previous finalists of the annual Furious Gazelle Halloween Contest, along with poetry and photography. I’m very proud that it includes my short story, ‘Mouse’, which won in 2017.

My excitement about my forthcoming novel, We Wait, which was already slightly out of control, has recently reached a new fever pitch. The final proofs have been returned to Eyrie Press, Nick Denton’s beautiful cover has been revealed, and amazing authors, Anstey Harris and Kerry Hadley-Pryce, have kindly provided incredible endorsements.

We Wait is due for release on November 18th and is available, right now, for pre-order from Eyrie Press. We’ll be celebrating the launch at Nottingham’s fabulous Five Leaves on November 21st. Please contact Five Leaves if you’d like to come along 🙂

The wealthy Crawleys can’t abide a scandal, so when fifteen-year-old Maddie’s behaviour causes concern, she’s packed off to the family’s country estate, along with her best friend, Ellie. But while Maddie is resentful, Ellie is secretly thrilled.  A whole summer at Greywater House, which she’s heard so much about – and with Maddie, who she adores…

But from the moment the girls arrive, it’s clear there’s more to the house and the family than Ellie could ever have imagined.  Maddie’s aunt, Natalie, and her bedridden grandmother are far from welcoming – and something has been waiting at Greywaters, something that flits among the shadows and whispers in the night.

As the July heat rises and the girls’ relationship intensifies, the house’s ghosts can’t be contained, and it isn’t just Ellie who has reason to be afraid.  Three generations of the Crawley family must face their secrets when past and present violently collide.

‘Hill House for the 21st century: haunting, dark, and very, very real. Chilling and very sinister, but still rippled with the confusion of being a teenager, of first love, and of making impulsive mistakes. A masterpiece.’ – Anstey Harris

‘As poetic as it is unsettling, We Wait is an absolute triumph. The beautifully vivid prose is reminiscent of Du Maurier – both haunting and chilling at the same time. An eerie, clever, spine-tingling novel. This is Megan Taylor at her most thrillingly dark.’ – Kerry Hadley-Pryce

Rather appropriately, Monnath Books will be publishing their short story anthology, Through Death’s Door, this Halloween.  I’m over the (full) moon that my short story, ‘Facing Lacey’, will be included (chuffed too that this story also gained me an honourable mention in The Third Corona Book of Horror Stories).It’s wonderful to be unleashing Lacey.

Through Death’s Door is available for pre-order on Kindle, with the paperback released closer to the 31st. I hope that you enjoy!

I’m really happy that two of my older short stories will be getting another outing this month.

‘These Seven‘, an anthology originally published by Five Leaves in 2015 as part of Nottingham’s bid to become a City of Literature, will be featured at the launch of Nottingham’s First Tuesday Book Club, organised by the British Red Cross on October 8th at St Andrews with Castlegate United Reformed Church.

These Seven’ includes my story, ‘Here We Are Again’, and it’s great to have been invited along. Several of the other authors included in the anthology will also be attending, as well as Alex Fraser, the head of Refugee Support, and the Sheriff of Nottingham.

Meanwhile, Nottingham Trent University’s Creative Writing MA students are busy putting the finishing touches to their anthology, ‘And What Do They Call You?’ , a celebration of their hard work and talent. After visiting the class to provide a guest workshop, it was a privilege to be asked to submit a story, and I’m delighted that ‘School Run’, first published by Weathervane Press in The Woman Under the Ground and Other Stories will be included.

‘And What Do They Call You?’ will be launched on October 30th at Nottingham’s Antenna.

Maintaining Your Novel’s Flow and Structure, 16th July, from 6.30pm

A two-hour workshop at Nottingham Writers’ Studio, in which I’ll be offering exercises and advice about attempting to maintain a sense of perspective while writing your novel, keeping in mind an overview, while also balancing quieter moments with tension.

And in August, I’ll be leading two creative writing courses for Nottingham Trent University’s Summer School. Start Writing your Novel will run over three days, 10am-4pm, from August 5th, and Short Story Success will take place over the next two days, from August 8th.

I’m very much looking forward to it all…

I’ll be providing a Fiction Masterclass (!) – where I’ll be reading, talking about my writing and providing a workshop on Thursday 11th July, from 7pm, at Carriages Café in Newark.  All the evening’s proceeds will be going to the excellent local charity, Think Children

Update – what a warm and welcoming night it was! Thank you to the beautiful Carriages Café and to Weathervane Press and to all the great people who came along. Most of all, enormous thanks to Think Children, such an amazing and essential charity. 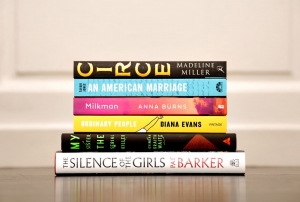 Alongside the fabulous Deirdre O’Byrne and Shreya Sen Handley, I’ve been invited to be part of a panel discussing the six novels shortlisted in this year’s Women’s Prize at Beeston Library on June 3rd.  I’m enjoying the reading, and am looking forward to the discussions very much – I think it might be a lively night…