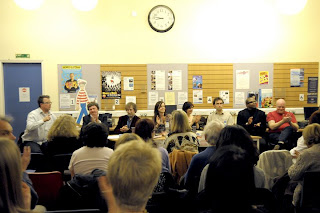 Hurrah! We did it!!
My heart was banging, but I managed to sneak in there amidst lots of Proper Authors, including the very fabulous Shanta Everington (as above).
And I didn’t fall over. Or even spill my wine.
Last night’s ‘Exclusively Independent’ reading event was an interesting, varied and enjoyable evening. I’m especially grateful to Lauren at Legend for taking charge of us all. And to Sean at Flame too, for (among so many things) submitting How We Were Lost in the first place.
Please visit the ‘Exclusively Independent’ site if you’d like to learn more about last night . . .

So – I’m coming to the end of the first draft of novel number three. There are only two more chapters left to write, I know (more or less) what needs to happen and I’m even still in first-draft-love with it. Nonetheless, I’m struggling.

In fact, my typing fingers seemed to have transformed into snails. And not just any snails. Obese, elderly snails in a going-backwards race.

This is probably partly because I have quite an ending in mind, which I’m a little scared of writing, but I also suspect that I’m on go-slow because I don’t actually want to finish. I’m aware that I’ll need to hide this one away for as long as I can possibly help it before I go back in again, on the editing attack, for draft two. And, as infuriating and disturbing as the writing has sometimes been, it’s also been such an exhilarating pleasure that I don’t want to say goodbye. Not just yet.

But there are a lot of things about to happen around these parts. There are more job things and children things that I need to focus on, and other-book things too (including finally finishing my creative writing MA and practising reading for next week’s Exclusively Independent event). I really should complete this draft – if only to begin it all over again, sooner.

But instead, what am I doing? I seem to be thinking about snails still, about how generally beautiful their trails are, and how strange their eyes and mouths, and about the snail hospital my sister and I ran when we were kids . . . And I’m even blogging about them too.

The lovely people at Legend Press asked me to write a guest blog in the run-up to next week’s ‘Exclusively Independent’ event – so today I am blogging over here, discussing the journey of my first novel, ‘How We Were Lost‘ from publication to selection in this inspiring new initiative . . .

I seem to be reading again, and even sooner – next Wednesday, 4th March, at 7.15pm, as part of Nottingham Writers’ Studio next ‘Word of Mouth‘ event at Nottingham’s Royal Centre!

Tickets cost £5, which includes a complimentary glass of wine or juice and are available in advance from the Box Office (0115 989 5555), or on the door.

On this occasion, I won’t be reading from ‘How We Were Lost’, but my short story ‘On the Island’.

It would be very wonderful to see you there …

After ‘How We Were Lost‘ was selected as one of the titles to be promoted by the new Arts Council funded ‘Exclusively Independent‘ initiative in December, I’ve now been invited to take part in their first ever reading event!

So if you’re knocking about in London on Wednesday, 18th March at 7:30pm, why not drop by Hammersmith Library?

Although tickets are free, you will need one to enter. These are available from Hammersmith Library (telephone: 020 8753 3812)

I hope to see you there! 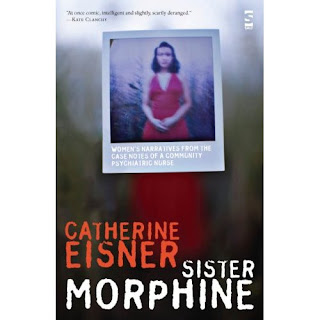 As part of Salt’s ‘Cyclone’ blog tour, I’ll be posting an interview this week with ‘Sister Morphine’ author Catherine Eisner.

Dealing with death, desertion and drugs, revenge and revelation, ‘Sister Morphine’ is a unique collection of startlingly inventive and genre-busting tales.
Presented by the author as ‘Case Notes of a Community Psychiatric Nurse’, Eisner’s gathered female patient ‘narratives’ come together to form an intriguing text, littered with mind-games.
I’m looking forward to talking to Catherine about her work . . .

Like much of the UK, we’ve woken up to white skies, white rooftops, white trees, white roads. Like probably half the UK, the smallest and I are too hot, too cold, nested in among tissues and blankets, Linctus and books. Muffled inside our own heads.

The snow is lying so thickly and falling (still falling!) so beautifully and that is such a novelty here. Heart-lifting, dizzying. We love it, we want to be out in it – but we’re sick (the cat, meanwhile watches at the window, with flattened ears and risen hackles; he’s disgusted – wants the flutter of real feathers, not this).

My mind is whirling quietly too. There is so much to think about right now.

There are the happy, interesting book things coming up – the p/b launch this week of Caroline Smailes’ fabulous ‘Black Boxes’. And at some point too, I’m interviewing Catherine Eisner about her intriguing ‘Sister Morphine’ for Salt’s Cyclone tour.

And there is my own writing – I’m in the final third of novel 3, preoccupied by ideas of motherhood and loss and gleaming water, and all the different ways there are of being haunted . . .

Then there are the big issues, the possibly life-changing ones – jobs, home, children.
Spinning thoughts like TV static. Exciting, frightening. Yet somehow so absorbing I almost feel detached, disassociated. It doesn’t quite make sense, not yet, I know.

But bugger it. Later on, I think, my smallest and I will bundle up despite our colds. We’ll go outside and play.

Thank you everyone for your amazing support. Wishing you love and peace and a bulging stocking ( :
I’ve included a tenuously festive, but very short story below . . .

At the end of the meal

She’s breathless; her cheeks pink, her eyes flashing silver, but she winces when her desert spoon scrapes across the bowl.

It’s the end of the meal. We’ve dispensed with her Thai chicken and the seasonal small talk and general gossip. We’ve downed two bottles of Pinot and it’s that time of the evening, the time for flushed skin and glittering eyes. For revelations, truth and ice cream.

It’s the moment when we connect, when we reconnect, at last. It always happens and though we never say it, I think we both understand that this is why we still go on meeting the way we do, why we continue the ritual of a meal in her big, warm family kitchen when I’m back in town each Christmas. It’s why we still describe one another as best friends, though we rarely meet for the rest of the whole long year.

“Tim!” I say, though it takes me a moment to remember who he is. He’s her son of course. Her son, how could I have forgotten? It’s the wine, I think, making me drift. I’m too easily distracted by my thoughts, too busy looking at Heather’s things, at all the greetings cards and tinsel, at the new cracks spreading around her eyes and the way her lipstick has worn off . . .

And, through the window, snow is falling the way it does in films and dreams, a steady heartbreaking dance of night and light. I lift my fingers to my own lips to check that my similar rosy smile is still in place.

And I know that she thinks I’m exclaiming over the way the years have rushed by, how it only seems like yesterday that I was a bridesmaid at her wedding, that she was matron of honour at mine . . . but what I’m actually thinking is sixteen.

It’s the age we were when we went on our school skiing trip to France. When she was the pretty one, the graceful one, the girl who flew down the slopes and skated perfect figure-of-eights on the sparkling rink. While I spent much of that week flat on my back, against the ice.

More snow, I think, my eyes moving between the window and her talking, eating, lipstick-less mouth. Her teeth part, and I watch the ice-cream slipping slowly between them, but I’m the one shivers. I’m suddenly remembering how freezing it was in those chalets, so cold that even after she climbed into my bunk, we couldn’t get warm enough. We were never warm enough. Her hands on my back – I can feel them still – were as cool and smooth as metal . . .

“We thought it was just a phase,” she’s saying. “But then I caught them! Actually kissing! And under the mistletoe of all places!”

She laughs, perhaps a little too loudly, with her head thrown back, showing me the pale curve of her throat, the point of her chin. And though her hair has a lot of grey in it, even some white, I think how it still falls in exactly the same heavy way. Like cloth, I think. Like winter water.
She’s still the pretty one.

“They just looked so funny,” she says. “So strange. Two boys, holding one another like that, hardly more than children. And they looked so alike! It was as if Tim was kissing himself, his own reflection . . .”

But I can’t do it. Whatever I was going to say, I can’t say it. It’s too hot in here suddenly; it’s suffocating. I glance down at my bowl instead, at the peaks and spreading pools of untouched vanilla, and at my own spoon, turning over in my hand. The silver jumps as it catches the light. For a second it’s blinding, and in that second, she reaches over and takes it from me.

And I feel the creak, and then the avalanche, as she lifts it to her mouth.

Judges have chosen ‘How We Were Lost’ as one of the first titles to be featured in the new ‘Exclusively Independent ‘ scheme.

‘Exclusively Independent’ is an Arts Council funded initiative aiming to bring independent publishers and bookshops together.

Congratulations to the six other selected writers (including the fabulous Shanta Everington). Each of our novels will be freshly promoted across a range of independent bookshops, beginning initially in London.

And just in time for Christmas too.
: )