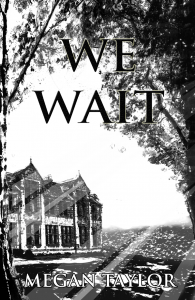 The wealthy Crawleys can’t abide a scandal, so when fifteen-year-old Maddie’s behaviour causes concern, she’s packed off to the family’s country estate, along with her best friend, Ellie. But while Maddie is resentful, Ellie is secretly thrilled.  A whole summer at Greywater House, which she’s heard so much about – and with Maddie, who she adores…

But from the moment the girls arrive, it’s clear there’s more to the house and the family than Ellie could ever have imagined.  Maddie’s aunt, Natalie, and her bedridden grandmother are far from welcoming, and something has been waiting at Greywaters, something that flits among the shadows and whispers in the night.

As the July heat rises and the girls’ relationship intensifies, the house’s ghosts can’t be contained, and it isn’t just Ellie who has reason to be afraid.  Three generations of the Crawley family must face their secrets when past and present violently collide.

‘As poetic as it is unsettling, We Wait is an absolute triumph. This is Megan Taylor at her most thrillingly dark.’ – Kerry Hadley-Pryce